It was the best of times… (Look very closely, sort of in the middle of the photo, the back rim of the pot. See that little beak? That’s Baby Bird.)

It was the worst of times.

(One of the poor little eggs didn’t hatch.)

Every spring, a wren nests somewhere in a plant on my deck or screened-in porch, so I’ve had lots of experience in picking up the signs for fledgling flight. I just knew this little bird was going to take off any day. And today was the day.

I was eating lunch, looking out the picture window, when I saw Momma Bird flitting around the deck. At first, I thought it was feeding time. But Momma Bird had bigger plans for the day. She hopped up to the lip of the flower pot and then dropped down beside the nest. Here’s what happened, loosely translated.

MB: Rise and shine, Baby! Today’s the day for you to take off!
BB: Mmmmph.
MB: (Poking beak into nest) Now, now, Baby, that’s no way to greet the most exciting day of your life! Up you go!
BB: (Sticking his little head outside the nest) But I don’t wanna.

Momma Bird trilled a “Let’s go, dear!” and flew across the yard. Baby Bird ventured to the opening of the nest and stopped dead in his little tracks. “Moooommmmaaa!”

The minutes ticked away. Momma Bird trilled from a tree. “Come along, Baby Bird! You can’t fly if you don’t come out of the nest!” Baby Bird took a few tentative hops and ended up behind the nest, where he plopped down and refused to budge. After awhile, Momma Bird swooped down.

“Baby Bird, what’s going on here? I haven’t got all day for this foolishness. I’ve got places to fly to, worms to catch, Papa Birds to peck.” And with a last buzz-by, Momma Bird yelled, “MOVE it!”

Minutes passed while Baby Bird waited. Until a chirp rang out from the trees! Momma Bird called again. “BABY BIRD! C’mon, kiddo, time’s a-wasting.” Still, Baby Bird sat. Because by now, Baby Bird had built up this whole leaving-the-nest into a BIG thing and he was beside himself. Baby Bird needed to calm down and just leave the nest, already, but he was frozen to the spot. 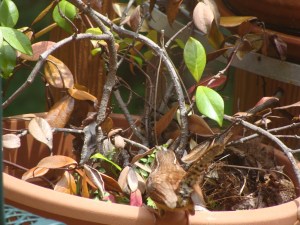 When suddenly, Momma Bird swooped in, a worm in her beak. Not exactly anti-anxiety medication, but darn close in the bird world. Hop, hop, hop went Momma Bird around the pot.

Baby Bird hopped up to the rim of the pot. Then, flop, down to the deck he landed. And just as Momma Bird promised, he got the worm. Off she flew, glancing behind her wing. And because Baby Bird didn’t know how to hop back into the pot, he lifted his tiny, barely-feathered wings and flew.

“It is a far, far better thing that I do, than I have ever done,” said Baby Bird (sounding far more grown-up than he did fifteen minutes ago).

(There’s a writing analogy in there somewhere, but as you’re all scathingly brilliant folks, I’m sure you can figure it out.)

11 thoughts on “Finding Something Friday : A Tale of Two Birds”