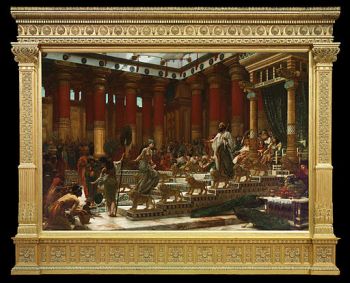 This morning, I heard the story of the Queen of Sheba and King Solomon and I probably should have been paying attention to the point of this Old Testament story, but all I could think about was how long it had been since I’d heard the expression “Queen of Sheba.”

I’m not sure where Madame Queen came from, but my mother used that expression till she died. Not so for “the Queen of Sheba”. That’s an expression that’s just sort of died out, though I suspect that if I said, “Who are you? The Queen of Sheba?” the Junior Halls would know exactly what I meant (even if they weren’t sure from whence the expression had come).

Anyway, that led me to thinking about Paul Harvey and my Muffin post today: The Rest of the (Revamp) Story.

Oh my word, I loved Paul Harvey and his Rest of the Story; the radio station where I worked carried the program around 5 or 5:30 but the feed came through at 3:00 and I–or my co-worker, George–had to be there to tape it. So we’d take a little afternoon break to listen as the feed came down, grab a Coke and have a smoke (I haven’t smoked in decades but I sometimes still smell a cigarette and think of old Paul Harvey and George). Invariably, when Paul would give the twist, we’d look at each other like, “WHAT?” We rarely saw the twist coming and that shock, that surprise, was so much fun.

I suspect old Paul (or his son, who wrote that program) influence my writing quite a bit; there is nothing I like better than a good, unexpected twist to a story. Which is not to say that my Muffin post today is completely unexpected; I’ve talked about all my thinking already so you won’t really get a true “Rest of the Story.” But it makes me smile, using that program format. It makes me a little sad, too, to think Rest of the Story is gone and expressions are dying out as well.

Though if you do read myMuffin post, I go on a bit in a somewhat la-ti-da manner and I wouldn’t blame you one bit if you thought, “Who does Cathy think she is? The Queen of Sheba?”

7 thoughts on “The Queen of Sheba and Paul Harvey”