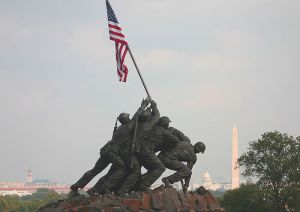 Last night, I watched the Memorial Day Concert from Washington. It was a moving tribute to our military, both those who are serving now and those who have gone before. The music and songs that are a rich tradition in our armed forces make my heart swell with pride and gratitude.

But as I watched, I wondered how many of our children know these songs that I sang in my school day years. My dad had been in the Army and served in World War II. My uncles had served, too. Most of my friends’ dads had been in the Marines, the Navy, the Air Force, or the Army, also. They were the men (and women, too) who had come back to raise families and build lives in America, the land of the free and the home of the brave. So, we sang the songs we heard round the house, on the television shows, at Fourth of July celebrations.

From the Halls of Montezuma,
to the Shores of Tripoli;
We will fight our country’s battles,
In the air, on land and sea.
First to fight for right and freedom,
And to keep our honor clean;
We are proud to claim the title
of United States Marine.

Anchors aweigh, my boys. Anchors, aweigh!
Farewell to college joys, we sail at break of day-ay-ay-ay.
Through our last night on shore, drink to the foam.
Until we meet once more. Here’s wishing you a happy voyage home!

Off we go into the wild, blue yonder,
Climbing high into the sun;
Here they come, zooming to meet our thunder,
At ’em boys! Give ‘er the gun!

Then it’s Hi! Hi! Hey!
The Army’s on its way.
Count off the cadence loud and strong (TWO! THREE!)
For where ‘er we go,
You will always know
That the Army goes rolling along!

You know the songs. They’re as powerful today as they were when my ten-year-old voice shouted out the cadence loud and strong (TWO! THREE!). We’re still singing. We’re still hoping and praying for peace in the world. And we’re still depending on the young men and women in the military who serve our country so that we can live and laugh in America, the land of the free and the home of the brave.

Reminds me of another song. Teach your children well.

(Photo courtesy of dbking at flickr.com)

7 thoughts on “Oh, Say Can You Sing? Memorial Day Music”