Sally the Crazy Dog is as much a Hall as anyone else around here…and in an ironic twist, Sally may be the only Hall NOT in the dog house at the moment. But that’s not why I’m tooting the horn for Sally (though it is worth a da-da!).

Sally sat still for a moment so I could take a photo of her. Yeah, I know what you’re thinking. Sally’s a professional sleeping dog. BUT, whenever I get the camera out, she goes into action. Hence, the apt moniker: Sally the CRAZY dog.

And the reason I needed a nice, curled up photo of Sally was that my writer buddy and rock artist, Ruth, was making a rock. Not just any rock-a painted rock that looked just like Sally. I wanted Juniorest Hall to have this keepsake to take off to school.

Okay, I know it’s April. But considering my track record with Juniorest Hall (the third in line), he’s lucky to be getting the rock 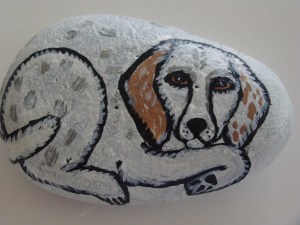 before he graduates (he’s a college freshman).

And P.S., Ruth will paint just about any critter on a rock. And I think these keepsakes are perfect for seniors graduating and leaving beloved pets behind at home. So, here’s a horn-toot for Ruthie’s Rocks, too. Da-da-da-dada!

Oh, and P.P.S. Ann over at Ann’s Rants won the Chicken Soup for the Soul’s Thanks, Dad! And thank you for all those lovely comments. I wish I could send a copy to each and every one of you. But I can’t. I’m too busy buying rocks. (Send me your address, Ann!)

13 thoughts on “Tooting My Horn for Sally Dog (and the Artsy Ruth!)”