On the other hand, I don’t think kindergartners should have Lolita read to them. Not necessarily because of the content. I’m going out on a limb here to say that I don’t think there’s a five-year-old who’s going to get the gist of Lolita. So why bore the poor kids? 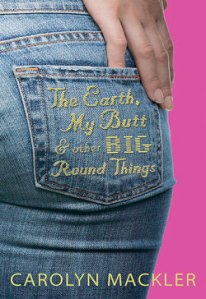 And here’s another thing. When I see books on one of those banned lists, it just makes me want to go out and read the book. So if you tell teenagers not to read something like The Earth, my Butt and Other Big Round Things (which was one of the 10 most challenged books in 2009), then get out of the way! ‘Cause those 15-year-olds are going to storm bookstores and libraries for that title.

I’m just saying. But you know who says it better? The American Library Association. You might want to see why it’s so important to celebrate the freedom to read during Banned Books Week.

And you can go over to the Banned Books site to find the other books on that Top Ten Challenged list, plus other interesting tidbits. Then go to your favorite bookstore or library and read a banned book.

I’m checking out The Earth, My Butt and Other Big Round Things.  Um, not my personal butt. I mean the book. Because how can you not want to read a fun book like that?