In keeping up with Picture Book Idea Month, another SCBWI Southern Breezer stepped up to share how a couple of ideas came to her. Jo S. Kittinger has written a ton of children’s books, she’s a Co-Regional Adviser for Southern Breeze, and she’s a much-in-demand speaker. How does she ever find time to get a picture book idea? I’ll let Jo explain how she catches up with her flitting ideas! 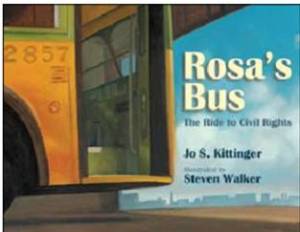 Picture book ideas are like hummingbirds. They zip through my mind on a regular basis. Some I catch and cage in my idea file, some get by before I write them down and are quickly forgotten, others land on my computer and demand to be written.

Rosa’s Bus: the Ride to Civil Rights was one that landed in my office. On my phone to be exact. Donny Williams, who owned Bus #2857 before it was sold to the Henry Ford Museum, called me up out of the blue and asked if I could direct him to a children’s writer that might be interested in writing a book about the bus! He had worked on an adult book dealing with the civil rights movement and his editor was interested in a children’s book about the bus. It turns out that his editor declined the manuscript I wrote, as it was not what she had envisioned. But some time later, after Larry Rosler (editor at Boyds Mills Press) spoke at a Southern Breeze SCBWI conference, I submitted the manuscript to him and he quickly accepted it.

The House on Dirty-Third Street, to be released Spring 2012 with Peachtree Publishers, was a humming idea that came from a slip of the tongue. My husband, Rick, and I were traveling and looking for an address when I stumbled trying to say 33rd Street. It came out Dirty-Third Street and I began wondering what type of place that would be. This picture book has been many years in the making. Thomas Gonzales created fabulous illustrations and I can’t wait to see the finished book!

Of course, there have been hundreds of idea birds that escaped, flitting past while I was pre-occupied. I’m sure 2-3 were likely award winners! Those seem to be the hardest to catch! But I’ve learned to keep a window in my mind always open to welcome ideas.

And P.S. I happen to know that Rosa’s Bus won a 2011 Crystal Kite Member Choice Award. So if I were you, I’d keep that window WIDE open and hope a hummingbird idea flits in!