Yes, I know I’d planned something different today, but that was before I realized that today is October 22nd. And I finally got around to writing up a special tale, so gather ’round, kiddos: 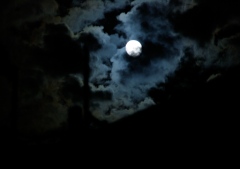 As the story goes, it was a dark and stormy night.

Well, okay, it wasn’t stormy. But it was two-in-the-morning dark when I awoke from a deep sleep. Which was a real shame, because I hadn’t been sleeping well for the last couple weeks.

That night, after celebrating my birthday—October 21st—I fell into bed, exhausted, following a nice dinner out and maybe an extra large piece of chocolate cake. A pretty tame birthday night, compared to the last ten years or so.

See, in the last decade, I’d been making up for what I considered “lost” birthday time. Not that we didn’t celebrate birthdays in my family, but my mom wasn’t one to go overboard with the whole idea. A birthday was a time to get something you needed, so I often ended up with new shoes (Saddle oxfords. Ugh.)

And when Mom realized how much I liked making cakes, thanks to my good friends, Betty Crocker and Duncan Hines, she was more than happy to delegate that part of the birthday celebration to me. So somewhere around the age of 11 or 12, I was the official birthday-cake-maker. And yep, there were a handful of years when I made my own cake. It was good birthday cake, too. I mean, I’d had lots of practice, but still.

So you can understand how once I ventured out on my own, I sort of went overboard for my birthday.

Thus began the 21 Days of Cathy’s Birthday, wherein I pretty much celebrated in some way or other (and expected Mister Man to jump on the bandwagon as well) every day. And if I’m telling the whole truth, there were a couple years in there when the extravaganza lasted till Halloween.

But that October night wasn’t exactly my usual over-the-top celebrating. Mostly because I didn’t throw myself a party that year. I wasn’t quite up to hosting throngs of people. I think they’d have been too nervous to come over and hang out with me, anyway. I was at least a week overdue and big as a house. Even so, we’d gone out to eat and arrived back home for cake and singing. I’d stuffed myself and gone to bed early, and was sweet dreaming away until I awoke in pain. It had been three years since I’d had a baby, but it only required about three seconds for me to remember what was coming.

“Where are you going?” she asked.

For cryin’ out loud, Mom. “The hospital.”

My sweet daughter was born a couple hours later, an early morning delivery on October 22nd, and my birthday has never been celebrated quite the same.

Oh, not that the month isn’t full of birthday shenanigans. There have been lots of fun parties and stacks of birthday presents. And cupcakes and sheet cakes and layer cakes—yummy! But most of the extravaganza is for that other October Birthday Girl.

My birthday has returned to the celebrations of my youth. I almost always buy myself a new pair of needed shoes (But boots. I do so love boots and wear them to death!) and though Mister Man will get a cake for me, I’m more likely to tell him to skip it. Too much of that yummy confection has landed on my hips through the years.

So, yes, as birthdays go, not too exciting. But I don’t mind. Because once upon a time, I received the best birthday gift ever. And honestly, how could you ever top a story like that? 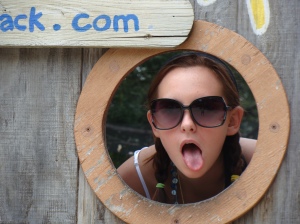 16 thoughts on “The Mother of All Birthday Stories”