Here it is April already. And the snake is back.

So basically, we’re going to be talking about snakes today. And I wanted to put it right out there for you so you’d know what was coming. Furthermore, if you do not want to see a snake, you should probably click out of this post right now. Although…

The snake tied in remarkably well with my topic over at The Muffin today and I’d hate for you to miss out on some terrific writing tips just because of a snake. But yes, there’s a snake there, too. The post is called “First, You Need a BIG Black Snake (Or How to Grab the Attention of Agents, Editors, and Readers)” so you gotta have a snake. But at least you know the snake’s there. Sometimes you have to take the bad with the good, y’all. Although…

BIG black snakes are good to have around. I’m just sayin’.

Anyway, back to my original point. Which is BIG black snakes and April. This is the snake that Libs alerted me to the other day:

You’ll note that this snake is on a walkway of my deck. And though it doesn’t look like much at first, you’ll see that in point of fact, it is a BIG black snake, even if it’s all twisted up. 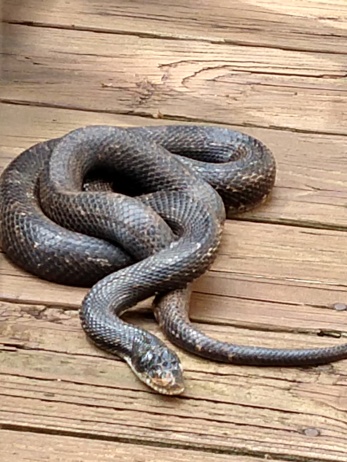 (It was stretched out next to the house and I had to disengage it and so it responded by coiling into itself.) But the minute I saw this snake–I was walking on the deck/walkway and talking to Youngest Junior Hall who was telling me about the bear (Yeah, I said bear. What is the world coming to?) that had broken into the golf cart barn where’s he working now–I recognized the snake.

Oh, yes, friends. I knew this snake. In fact, I’d documented this snake right here on the blog. So I went back to find the post where I’d discussed this very same BIG black snake and there it was: “If It’s Wednesday, It Must Be Time to Post.”

The snake had nothing to do with that post, except–and this is really what the post, “First You Need a Big Black Snake...”  is all about: every single comment on that year-ago post was about the BIG black snake.

Anyway, as I was proving, you’ll note the date of the first appearance of the snake was April 18, 2018. So clearly, this snake has a nice, comfy home somewhere under and/or around my deck and walkway. And I’ll bet you five bucks right now that in that home, possibly next to the front door, you’ll find a calendar with April circled.

7 thoughts on “If It’s April,Then It Must Be the Black Snake”