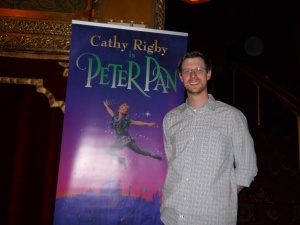 I wrote about Oldest Junior Hall and his dream to see Peter Pan, a dream he’d had since he was just a little Peter Pan himself. And lucky him, the show came to The Fox Theater in Atlanta, and luckier him, his mother (that’s me) took him (and his sister) to the show. Childhood dream happily, wonderfully realized. Yay!

Honestly, when I saw that Cathy Rigby was playing Peter Pan, I was a little wary. I mean, I’m all for stamping out ageism, and keeping fit, but Cathy Rigby? How old is Cathy Rigby, anyway? I watched her do her gymnastics thing in the Olympics years ago. (I was but a wee, wee child.)

So I looked it up. She’s 59. FIFTY-NINE. Which by itself is no big deal. I know plenty of 59 year olds. But I don’t know any 59 year olds who can walk on their hands, do splits and cartwheels, flip into dozens of somersaults while FLYING, and sing at the same time.

I sat up there in my seat absolutely amazed. The fact that she could remember all her lines was pretty stupendous, but that she still had moves like Gabby Douglas was…I don’t even have a word for it. Inconceivable. That’s what it was: inconceivable. Even Oldest Junior Hall remarked upon it.

Now, Cathy Rigby didn’t leave gymnastics and immediately take up theater. Nope. She taught gymnastics and enjoyed a long career as a sports commentator, embarked on a seven-year stint in intensive theater and voice training, and then hit the boards as Peter Pan in 1990.  Talk about someone going after a dream.

So I watched Cathy and thought how in the world does that woman have the energy to hop all over that stage (and never once fall on her butt)? But I also thought it’s never too late to go after what you want.

What do you want in your writing career? It’s not too late to achieve your dreams–and you don’t need fairy dust, either. Just focus on what you want and the steps that will get you there. Then do it.

(But I wouldn’t mind a sip of whatever Cathy Rigby’s drinking before those Peter Pan shows.)