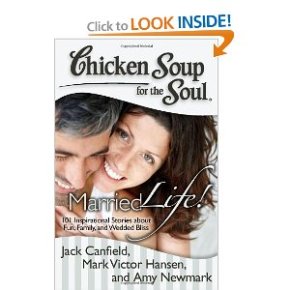 So, um, yeah. It’s the last day of the month and I just realized that I hadn’t said a word about April’s Featured Byline: Chicken Soup for the Soul’s Married Life!

Now don’t go reading anything into that omission, friends. The Beneficent Mr. Hall is the Benefactor of the Feast over here and keeps me in the style to which I have accustomed myself. And other than expecting me to fix the feast on a semi-regular basis, he doesn’t ask much.

Which is a very good thing, on account of the fact that when I’m writing, I’m not good for much. I wrote and submitted two stories for Married Life and both were included in the book. The editors were looking for stories about fun, family and wedded bliss, and I guess both of my stories fit the bill.

As April marks the 33rd anniversary of our wedded…well, sure, let’s call it bliss, I decided to feature that book over on the sidebar.

And since The Beneficent Mr. Hall played a prominent role in both stories, I should thank him for the inspiration.

(But I kept the bucks–and spent it all on writing. Wheee for me!)