So what a week, huh?

That crazy voting, the winners and losers, the tears, the tension…seriously, I was on the edge of my seat, watching. But enough about The Voice.

Something else is on my mind this morning–well, it’s been on my mind for a couple of days now and I thought that maybe it was time to share it. 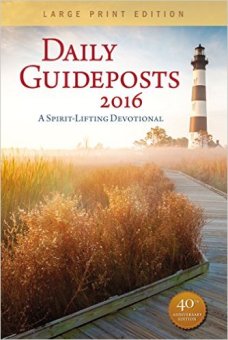 I read Daily Guideposts 2016 every night; I found the book when cleaning up Dad’s place and I brought it home, thinking how comforting it would be to read this devotional that Dad may have read in the months before he died. And it has been comforting–and inspiring and interesting.

So on Saturday, November 5th, I read about summarizing your faith in six words and I was immediately struck with the concept. Partly because I’m a writer and love a challenge, but mostly because I often preach about story, that if you can summarize it in a sentence, you know your story. And I wondered, do I know my faith that well?

And so I grabbed my pen and within a minute, I’d written these words:

Maybe it’s simplistic, but those six words have resounded in my head and my heart this week. Love. Forgive. Serve. And who knows what mighty things my faith can accomplish when I repeat as needed?

I’d love to know what your six words would be. And before I forget, I also have a post over at the Muffin today, talking about favorite writing tips, websites, insider info. I’d love for you to share any of your favorites there as well. And you know you don’t have to keep your response to six words, right? But hey, you’re a writer–challenge yourself!

Holy firecrackers! Half the year is gone already! (Imagine me running around, bumping into walls) It’s just…well, that was fast, wasn’t it? Kinda puts me in mind of Jodie Foster (at the end of this clip from Maverick):

And I had this thought–sort of Part Two of the Super Duper Writing Notes Idea–that at the end of each month, I’d share some of the really good tips from the month, all in one handy post for you. But…uh…I’m not so sure that I followed through on that. Still, it’s never too late to implement a good idea, so herewith a few of the great tips (courtesy of my Writing Notes, June, 2015):

1. Over at the Creative Penn, “29 Books Every Writer Should Read” (So 29 is a lot, right? Maybe just pick a few that appeal to you, but it was a great comprehensive list.)

2. Melissa Stewart’s blog, Celebrate Science, a blog for teachers, parents, and those writers interested in tackling non-fiction (specifically science) offered “21st Century Nonfiction Conference” (A handout of books, by category, that you can use as mentor texts, or just take a look at, if you’re interested in giving non-fiction a try.)

3. Anne R. Allen with Ruth Harris (and really, they have SO much good stuff at this blog all the time!) share “Edits, Editors, Editing: The Secret Weapon of Every Successful Writer.” It’s just packed with info, so you’re going to need a bit of time to get through it all, but editing? That’s a skill you can take to the writing bank.

So, a good slate of tips and such and not too overwhelming, I think, to start off your July writing. ‘Cause this summer is zipping by fast. (I thought it was fast. Was it fast? I thought it was really fast.)

So I just spent 5 days at the beach.

I never actually made it to the beach. But there was all that driving to get down there, and the fixing of the flat tire once we got there, and the flowers to pick out and buy and plant and deliver and the great seafood to eat and the bands to give a listen and so today–today–I just wanted to pull a Libby: 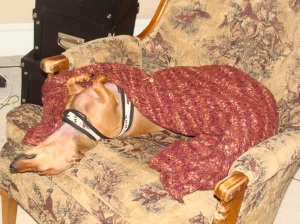 (Libby goes to stay with Uncle Jimmy and Aunt Cappy and their four dogs whenever we take a trip. And when we get her back home, she lays about, pretty much like the above for…oh, a week or so.)

But I’ve got a revision that ain’t gonna write itself. Still, I needed a little more motivation than a dog picture. So I decided to review Pixar’s Practically Perfect 22 Rules of Storytelling to just, you know, get the old gray cells working again.

And right off the bat–

Rule #1: You admire a character for trying more than for their successes.

I was like, yes. This. This is what I need to keep in mind as I tackle the revision, as I strive to keep this 12-year-old protagonist…well, twelve. So how about you? If you have a minute, read the 22 Rules and let me know which one resonates with you.

And if you’d rather just pull a Libby, well, maybe keep that to yourself.